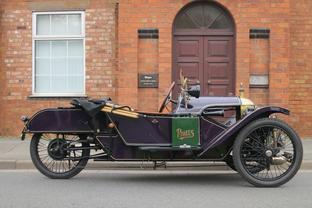 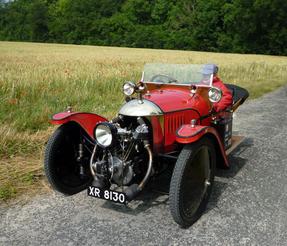 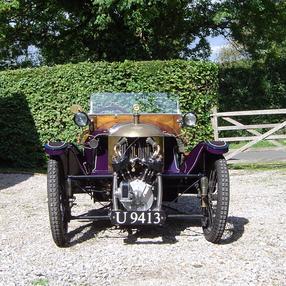 U 9413 – aka Maud – was first registered on 23rd May, 1921. The engine – JAP s/v number 20/77134 – is original and stamped with the Morgan chassis (car) number 5137. The chassis incorporates all the improvements introduced for the 1920/21 range. Much of the original chassis, running gear, fittings and wood- and tinwork have also survived. U 9413 has the sleeker, more rakish look of post-1920 cars compared to the rather perpendicular style of the earlier Grand Prix. It was possible to reproduce the original colour scheme from traces of paint found on the remaining bodywork, although the shade of purple now used is a little darker.

This story, ‘true in every word’, is about us, Margaret and me and our car; not just any car, but a one called Annie. Annie is getting on in years: old, yes, born in 1925 when I was a twinkle in my dad’s eye. Annie was strutting her stuff in Yorkshire then, I think, but it doesn’t really matter now as she is here in Northumberland. So, to get my tale underway, we already have a 1990 plus 4, one of the best cars ever made, I don’t mean mine, but the cars of that year. It was truly a good year for Morgans, but every time I saw or even heard a three-wheeler I went wobbly kneed. I can’t say what it was; some people get that way about women, I don’t know why, because they don’t even smell like a three-wheeler. I knew I could not afford one, so I only used to sit and watch the price getting higher and even more out of my reach.
One day I got a message to say Tony Oliver, our Chairman of Normog, had bought a three-wheeler, I could not rest until I had seen it. We went through to Trimdon to see it and, God, I was smitten.
I move on a couple of years when I was left some money and the three-wheeler began to look more hopeful. It was just finding a good one at the right price. Keep away from the very old ones, I was told, so go for 1933/1936. But the price was too high and the cheaper ones were wrecks. I saw one advertised at Harpers, a JAP-engined Grand Prix of 1925, but I was told it was too old. It was advertised for another three months and the price was right, so I gave Roger at Harpers a ring. “Oh, you mean Annie,” and he explained all about her. She had been rebuilt over a few years, some jobs still to do, but it would not have mattered what he said, it was the name that grabbed me. He said he would deliver Annie on a trailer for me, so it was all systems go to get her garage ready for her coming.
The day dawned, he phoned to say he was on his way, and that he would arrive about 5:00 in the evening. Next, a phone call to say he was at the Tyne Tunnel and could I meet him on the A19. A place was arranged and I was waiting when a big Volvo flashed his lights and pulled into the layby. On the trailer was Annie. It was the first time I had seen her, and she was just a vision of loveliness. In all the words of this article I could not put in writing what I felt.
We got her home. She didn’t start very well, she ran a bit lumpy, and the brakes didn’t fill you with confidence. Anyway, with a lot of help from friends and three-wheeler club members, the brakes were renewed, the rear wheel re-spoked, the magneto sorted, plus a new set of cables. Last but not least, a new steering wheel, and she looks a treat. Over the winter she may get a new coat of paint. Every day without fail I go to see her in the garage, I talk to her, I put the radio on for her, and I cover her each night. I am so pleased when people come to see her; you are welcome to come any time you like. I love her to bits and she reminds me of another woman who made it possible for me to buy her; her name was Anna, my Mother. If you think I am joking, yesterday I am sure she smiled… or was that just me?

​Chris acquired this Grand Prix around 1963. XR 8130 was registered on April 2nd 1924 with frame number 8492 (which is nowhere to be found). It was listed in the registration book as having a 1100cc engine. The engine that came with it was an earlier incomplete J.A.P 90 bore. The car had a homemade body on it using an Austin 8 bonnet as the tail panel (just to give you some idea!). It was while looking for more parts to complete the car that Chris stumbled across an Anzani engine, which the car now happily enjoys.

Nothing much new to report here; it's all in the previous pages. The GP lives in Ottawa during the summer and goes into winter storage in Calabogie, Ontario, where it is shown here. You can see its trailer in the background on the right.

Maud was purchased new from Potters of Leeds by John Fowler & Co (Leeds) Ltd. By 1921 the heavy steam-engine manufacturer was under the management of the founder’s son, Robert, and the story goes that the Morgan was acquired for the use of Robert’s daughter. It was sold after a year and, following a rear-end accident in 1924, was laid up by the second owner in a brickworks where it remained for the next 45 years. Following transfer to a Leeds scrapyard it was acquired by a local motorcycle restorer who, having rebuilt the rolling chassis, shelved the project until the late ’90s when he sold it. It changed hands again twice, without further progress until I bought it in 2005. It took me a further five years to complete.
After nearly 90 years of disuse, Maud returned to the road in 2011 and has reliably covered over 4,000 miles since. The full story of Maud can be found in the November, 2011 issue of The Bulletin of the Morgan Three Wheeler Club. 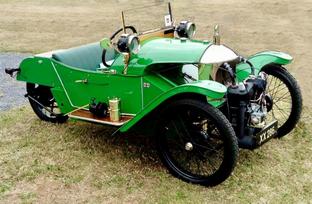 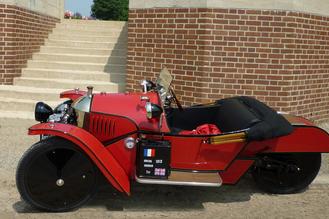 Here we feature pictures and brief descriptions of a small number of the Grand Prixs that survive to the present day. We're grateful to the owners for their interest in contributing to this section. If you own a GP, please consider a feature here.​ 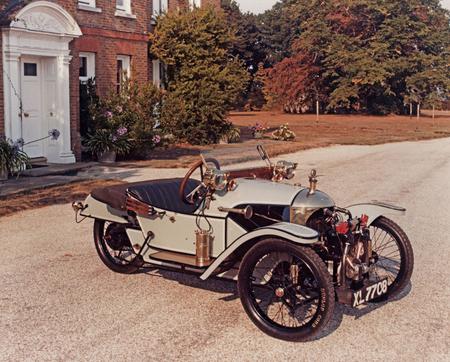 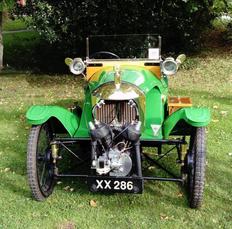 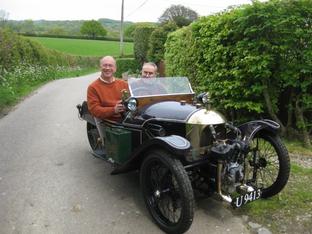 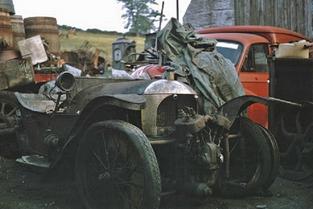 Grand Prix XL 7708 was registered August 4th 1922, frame number 6783 which is on the timing cover of the M.A.G engine number 2C20A 46564. This car was more complete and in better condition than XR 8130, although there was nothing left of the main woodwork. It did have the steel panels and tail, and had a good radiator. Various features that were still in use in 1922 include 2" torque tube and 1" rear forks. 1922 seems to be the first year of the metal foot pedals, but not yet with the embossed 'M' pattern on them. Chris met the second owner who had it from 1926 to 1931. This one was restored a long time before the 1924 one. Strangely, this car was fitted with 21" well base wheel rims and the 6" front brakes. He decided to retain the rims and had some aluminium discs made, finding the hub grease caps to take these in F. H. Douglas, a Morgan agent in Ealing, London.